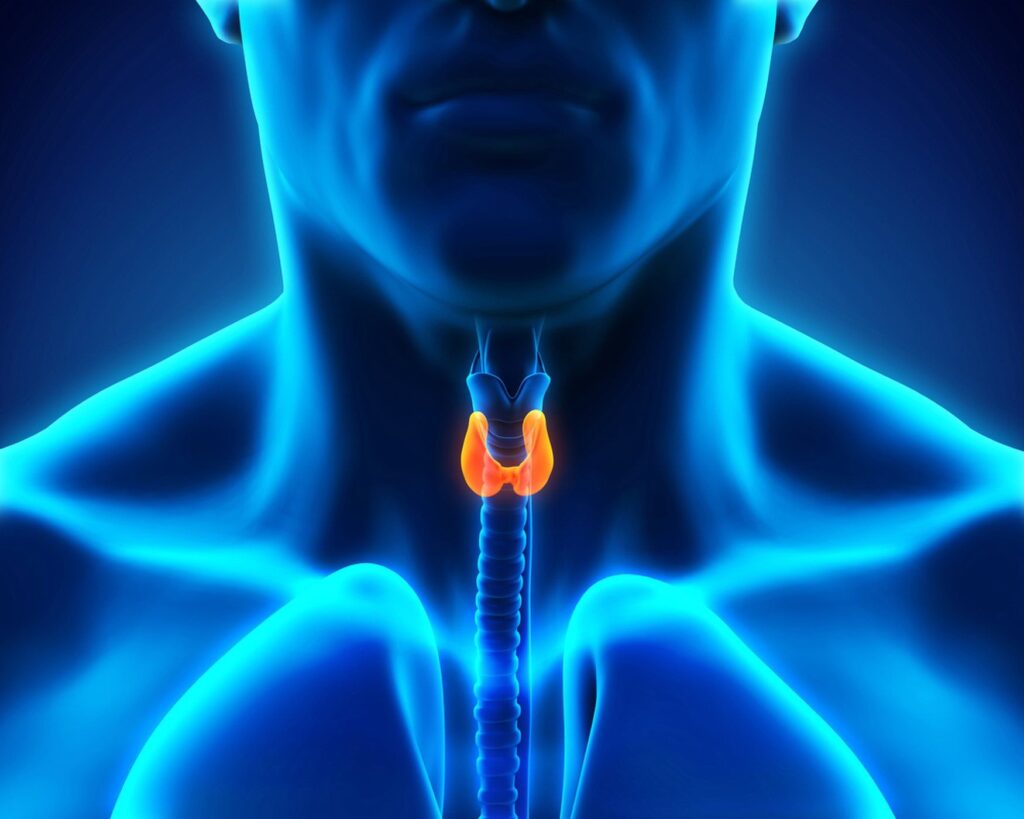 The Thyroid: Your Body’s Powerhouse Gland

The thyroid gland is located at the front of the neck just below the Adam’s apple also known as the larynx. It is tiny butterfly shaped gland and consists of two lobes located on either side of the trachea. The thyroid gland is small but plays a huge role in one’s health and well being.The thyroid is part of the endocrine system, which is essentially a collection of glands. Glands produce hormones that regulate mood and various functions in the body. These hormones impact a host of vital body functions, including heart rate, skin maintenance, brain and nerve function, body temperature regulation, fertility, digestion and more.The thyroid gland controls just about every cell in the human body. It secretes various hormones into the bloodstream. The hormones control the rate at which cells and organs turn nutrients into energy and the amount of oxygen cells use. In essence, the thyroid gland is the body’s master metabolic control center. So many vital functions are at the mercy of thyroid function.The thyroid works in conjunction with the pituitary gland. The pituitary gland regulates how much hormones the thyroid releases. The release of thyroid hormones from the thyroid gland is controlled by hormones from the hypothalamus in the brain and by thyroid stimulating hormones produced by the pituitary gland. This messaging process is often referred to as the ‘feedback loop’. These 3 glands work as a team to keep the body’s homeostasis or ‘equilibrium’ by releasing just the right amount of circulating thyroid hormones in your body at any given time.There are several health issues that can arise from the thyroid. Here are some of the most commonly diagnosed. Graves’ disease is an autoimmune disorder. The immune system attacks the thyroid gland and makes it become overactive. An overactive thyroid is a condition called hyperthyroidism . A bulge on the neck, called a ‘goiter’ is a common symptom. Hypothyroidism is the opposite of Graves’disease. It occurs when the thyroid gland does not produce enough hormones. This can cause body functions to slow down or stop completely. Hashimoto’s disease is another thyroid condition that triggers the immune system to attack the thyroid gland, sending the endocrine system into chaos. A thyroid function blood test can be performed in a doctor’s office to gauge overall thyroid health.For the thyroid to remain healthy, it needs iodine to produce hormones, but just a little. Too much iodine can actually make the thyroid produce less hormones.The best way to get iodine is through eating healthy foods, such as seafood and dairy products. You can also get it by seasoning your food with iodized salt. Fun fact: Iodine was first added to salt in the United States in the 1920’s to combat goiters.The thyroid might be small, but oh, is it ever mighty!More facts about the thyroid gland: